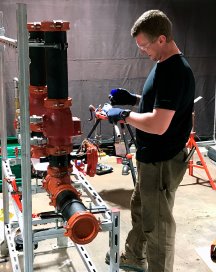 While he is proud of the accomplishment, he admits he wasn’t even planning on entering the contest this year.

“I was planning on entering next year but my teacher suggested I give it a shot this year because if I didn’t make it this year I could try it again next year. I ended up winning the whole thing,” he stated. “It was an amazing experience. I learned much more than I thought I would and I can’t thank the United Association and Local 853 enough for giving me this opportunity.”

Pierog won first place in the Skills Ontario competition in Toronto, which advanced him to the Skills Canada contest in Winnipeg where he was awarded the silver medal in the sprinkler systems category. He then moved on to represent Local 853/Central Canada at the U.A. National Apprentice contest in Toronto, which led to the most recent week-long international competition in Ann Arbor where he took the top spot.