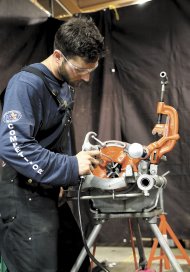 Top piping trades apprentices from across Canada, including a female welder from Alberta, are poised to showcase their skills at the international level at an upcoming competition in Ann Arbor, Mich.

The five apprentices, representing locals of the United Association (UA) of Journeymen and Apprentices of the Plumbing and Pipe Fitting Industry of the United States and Canada, were in the winners’ circle at the UA’s national apprentice competition in Toronto in June.

In Ann Arbor, they will compete against American and Australian apprentices at the event which gets underway today (Aug. 5) and concludes with an awards ceremony Aug. 13. In all, there will be 32 competitors.